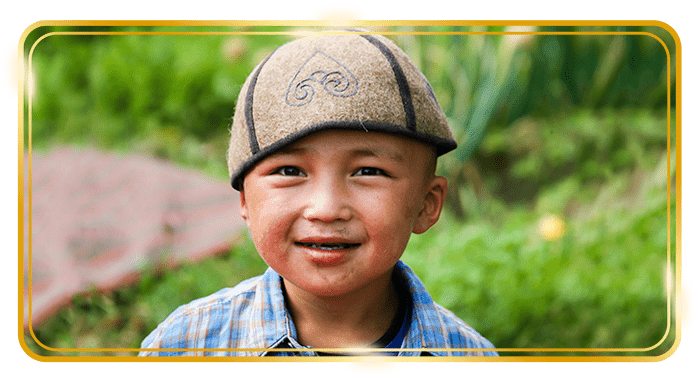 Day 1: Bishkek
After meeting your guide at the airport, you will take short drive to Bishkek. The capital city Bishkek is the cultural, financial center and the biggest city of Kyrgyzstan. You will enjoy the city tour full day. During the first day of your tour your guide will show you the architectural and cultural sites of the young and beautiful city. The massive Pobeda Square (Victory Square) will impress you, mildly Old Park will hide you from the summer heat, and Central Square will welcome you with graceful public buildings around. Finally, the National Museum of Arts will open his doors to you. After enjoyable museum excursion, we will take you to fast-moving, picturesque Asian Bazaar. In Bazaar you feel the vibrant life of the local traders selling fresh smelling fruits, buttery breads and other goodies. Furthermore, in bazaar you can find any other good you need. Hight will be in a hotel.

Day 2: Bishkek - Burana - Issyk Kul northern shore
Your tour will continue your adventure at 8 am to Issyk Kul Lake, the second alpine lake of the world located between the high mountains of Tien Shan. Lake famous as "the pearl of the Central Asia" believed to be curative owing to his salty water. On the way to the lake, you will have a break at the archeological and architectural complex Burana. It is the remains of the old city Balasagyn, developed during the 11th-12th century. Here you will learn more about stone monuments left by ancient nomadic tribes. Night will be in a hotel close to the lake.

Day 3: Issyk Kul lake - Karakol
After the breakfast, go on your travel to Karakol city, on the eastern tip of the lake. Before leaving Cholpon Ata town, have an excursion to the Open Air Museum of Petroglyphs. Petroglyphs are ancient rock drawings dating back to 800 BC. It is believed that shamans depicted these inscriptions more than 2000 years ago on the territory of Kyrgyzstan. In Karakol we will visit historical sites of late 19th and early 20th century: Chinese Style Dungan Mosque and Orthodox Church of Holy Trinity. You will spend night at cozy guesthouse.

Day 4: Karakol - Jeti Oguz - Issyk Kul southern shore - Bishkek
Today will be the travel to the most enjoyable drive along the virgin shore of the lake. Untouched, wild beaches covered with colorful bushes and trees will make you to stop for photos. On the way, we will drive up to the gorge famous for its grandiose rock formations, popular all over in Kyrgyzstan. These mountains known as a Jety-Oguz (Seven Bulls) has different legends about its name. From the other site, it forms the shape of the Broken Heart. Later your tours continue to the land of traditional eagle hunters- Bokonbaeva village. Here we will listen to the story of nomadic hunting; from training to the animals, they hunt for. Drive back to Bishkek and night in a hotel.

Day 5: Flight
After you pack all your good memories from the trip, your guide will accompany you to the airport. The end of travel.