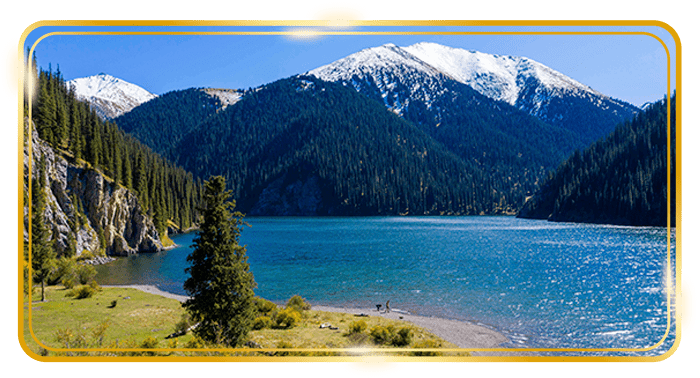 Day 1: Almaty
You will be brought from the airport to see the sights. The tour begins with an interesting survey of sights in central part of Almaty. You will learn more about rich history and development of the Southern capital of Kazakhstan and also will see the best views of this city. You will go to a popular place for citizens of Almaty - the Green Bazaar, where you can buy a lot of interesting and useful things. Then the tour will go on in one of the oldest historical Almaty parks - Panfilov Park, where is situated one of the most beautiful wooden constructions in the world - Zenkov Cathedral. After you will also go to the Memorial of Glory and Eternal Flame, this place is devoted to the memory of the strugglers who died for freedom and independence of Kazakhstan. After visiting sports, business and cultural places of the city on the day you will visit the Medeo Gorge- popular place in Almaty thanks to the dam, which protects the city from hazardous mudflows and due to the highest mountain skating rink in the world. Next destination is the Kok-Tobe hill (height -1130m above sea level) where is located one  the tallest TV tower in the world  and where you will pass it on the fascinating winding mountain driveway. You will finish your tour by the short riding on the popular cableway of Almaty from the top of the hill to the center of the city. Transfer to hotel.

Day 2: Almaty - Kolsai lakes
You will pass over 300 km from Almaty to Saty settlement this day. On road you will have a possibility to stop in small town to try atmosphere of a local market. You will change the transport for one of local cars, after lunch, on such as "UAZ" or "PAZ" (Russian car models), because these cars can pass on rough stony mountain road(12 km) to Kaindy Lake. Kaindy lake is located among a coniferous forest at an altitude of 2000 meters above the sea level in one of the Gorges Kungei Alantau. The lake is about 400 meters long and is famous for its origin. The lake has appeared in 1911 because of shattering earthquake which in a consequence has caused a landslip, water has filled a valley because the landslip has blocked a valley a natural dam. Through a transparent water surface needles of flooded trees are well kept and purely visible, because the water of the lake is very icy,  and dry bases of fur-trees pass a water table as masts of underwater division. "Pearls of the Northern Tien-Shan" is Kolsai Lakes which is represent a cascade of three lakes. Vertical decrease between these three lakes makes approximately 700 metres. You will spend the night in the guest house.

Day 3: Kolsai lakes - Charyn Canyon - Almaty
At 8.00 you will begin your tour to Charyn Canyon. On the way to the canyon you can explore a local museum of applied and traditional decorative art For an hour before arrival in a canyon you will have breakfast in local cafe for full immersing in national aroma. You will enjoy a great and fine view on arrival in Canyon of Charyn after you will go downstairs to the base of canyon and pass about 2 km  through a labyrinth of the Castles Valley with its walls of the freakish forms hanging over you. There is a small descent în the basis of a canyon to the end of the walk, where you will reach a new oasis on cold river bank Charyn, where also situated small café, working in summer and eco-park with small number of yurts(traditional dwelling). After some rest, come back to the same way to steps, then on the car go on other destination point  with not less charming view. Come back to Alma-Ata.

Day 4: Almaty - Nur-Sultan
This day you will transfer to Almaty International airport for the flight to Nur-Sultan. During travelling you see not only a historical part of a city but also modern. You will see Constitution-square where the president of Kazakhstan N.A.Nazarbaev declared the decision on transfer of capital of the country from Alma-Aty to Astana (now the Nur-Sultan). You will have an opportunity to look back in the past, to see more closely one of the most beautiful and well-known buildings in a city architecture - the Museum of the First president of Republic Kazakhstan* with the Gold person who is popular not only in the Kazakh steppe, but also and in all Central Asia. That it is better to understand today's life of a city, you will visit the huge and inimitable shopping centre Khan Shejtir. To admire the remarkable view of the Kazakhstan capital on a special deck of supervision, you rise up on the lift to the top of the monument Astana-Baiterek. After you will pass Ishym river and get to the Kazakh Eli Square. Then you will arrive on other some kind of interesting and unique  place  - the Palace of Peace and Reconciliation, and also can see extraspecial beauty of a mosque of Sultan Khazret. Important point of the tour will be National Museum of History of Kazakhstan*, where you can  have a sight at the far-reaching plans of the development of Nur-Sultan together with its historical past. Transfer to the hotel.

Day 5: Nur-Sultan - Borovoe - Nur-Sultan
This day at you will have full day journey to National park Burabai (Borovoe) which has 85000 hectares of a northeast part of eminence Kokshetau. Unfortunately, there are no monuments of a material heritage in Borovoe. But the nature has formed unique interesting natural landscapes of extraspecial beauty with a combination enormous mountain picture, dark blue mirror lakes, coniferous and deciduous groves. Upon arrival you will see see Burabay and Zheke-Batyr mountains and explore Khan's pass. Your look will be rich with Abylaykhan Valley views Ok-Zhetpes rocks, Ush-kyz and Kokshetau mountain each of these places has own delightful legends connected with history and known Kazakh people lives. After that you will have a walk to Bolektau mountains where at the top you can see a majestic view point of lake and  a surrounding picture, also Zhumbaktas rock. You will be transferred to Nur-Sultan and the hotel.