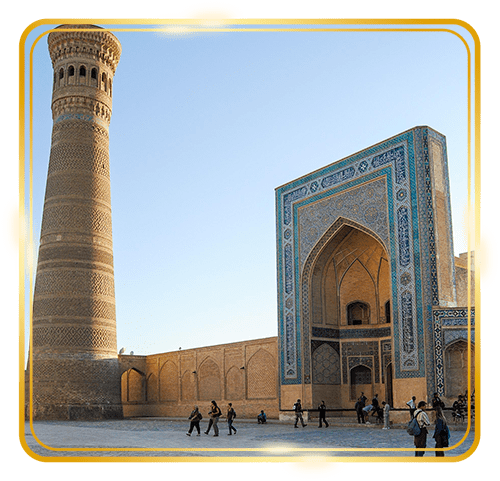 Day 1: Tashkent
Your guide will welcome you at the airport and accompany you to the capital city and you will behing your adventurous travelling in Uzbekistan. Today you will explore fast-growing city Tashkent with its historical monuments. The first on the list will be Independent Square, which was erected for the honor of the victory over fascist Germany during the World War II. It is the main square of the city, where all festival and other public celebrations take place. Then you will take a short walk to Amir Timur Square through the beautiful Broadway. Later you will have a chance to take ride on Tashkent subway. City metro considered to be one of the beautiful subways in the world. Next remarkable places are Chorsu Bazaar, Kukaldash Madrasah and Hast Imam complex, which includes many madrasahs, mosques and mausoleum. The most important site of the day is Othman Quran, the oldest copy of the holy Quran dating back to 8th century. The owner of the book was Othman Ibn Affan, one of the four Caliphs succeeded prophed Muhammad. Nowaday , you can see blood stains spread on the sheets of the book, it happened when he was murdered by his enemy. Overnight in a hotel.

Day 2: Tashkent - Samarkand
The morning train will take you to once capital of Tamerlane's state, a conqueror of the medieval ages famous not only in Uzbekistan but all over the Central Asia. Fascinating city Samarkand located in the Zerafshan river valley. It is the second biggest of Uzbekistan after Tashkent and coeval with Babylon and Rome. The sightseeing tour will capture Registan square, Shakhi-Zindeh, Mausoleum Guri Emir and Bibi Khanum Mosque. Main site Registan has unique atmosphere, when you get to the square you feel time stop and allow you to admire the beauty of three amazing madrasah buildings. There architectural masterpieces history goes back to 15th-17th century. Next is one of the Heritages of UNESCO Complex of Shakhi-Zindeh, it was constructed during the 11th-15th century. Tamerlane's wife mosque is Bibi Khanum Mosque. He built it after his confession to India. Night in a hotel.

Day 3: Samarkand - Bukhara (morning train 10:15-11:45)
Today you will travel by train to Bukhara city to continue your tour in Uzbekistan. Entire day will be full of interesting sightseeing. In the beginning, you will visit the oldest citadel in Bukhara. It is called Citadel Ark, served as a residence of many Bukhara Empires dynasties. Later you will see a perfect work of 9th and 10th century architecture, Samanids mausoleum. Further , you will find yourself in Chashma Ayub, known as a Job's well . This monument was built for the honor of the city governor Abu-Fayud Khan. Bolo-Hauz mosque also has an interesting style. Next will be Nodir Divan Begi, the most popular madrasahs of old Bukhara and represents one of the remarkable sites of Lyabi House Ensemble. Lyabi House Ensemble is the famous sightseeing in the city. The last destination will be Poi Kalon complex, which stands out with its extraordinary design. It includes three glorious constructions: Kalon minaret, Kalon mosque and Mir Arab Madrasah dating back to 11th-16th century. Overnight in a hotel.

Day 4: Bukhara
From the morning, you will explore the area around Bukhara during your sightseeing tours. Bahauddin Naqshbandi complex will be the first stop today. It is a memorial complex of outstanding Sufi leader and philosopher Bahauddin Naqshbandi complex, who was also a spiritual advisor of the legendary ruler Amir Timur. Nowadays, this complex became a popular place of worship for Muslim community from different parts of the world. This site represents Kushbegi and Muzafarohana mosques, inner garden with pool, madrasah, and Bukhara rulers' burial vault of and Dakhma upon the tomb of Saint Bakhauddin Nakshbandi himself. Next is going to be the owner of the beautiful name Sitorai Mohi Hosa complex. It was named for the honor of the emir's wife young death. Sitorai Mohi Hosa means "Star - like and moon- like Palace". Today we will finish with Chor Bakr memorial complex, which located in Sumiton village and known as a town of dead. This place remain the four side of the world and that means all human creatures are equal. Complex was started to build during the time of Samanids reign before the 16th century. After enjoyable tour, we will drive back to city and have a rest at hotel.

Day 5: Bukhara - Khiva
Today you will travel transferred to more fascinating city of Khiva, the last city inn your tour in Uzbekistan. City has deep history and rich culture to see. The story of the city goes back to legendary Khorezmshah's State. According to the 10th century documents, Khiva was one of the major cities along the Great Silk Road. Thousands of caravans, skillful traders stopped over the city take a rest of even sometimes to trade with other merchants. It is an important fact then city had remarkable place on the major trade road of the world, connecting East to the West. Nowadays it is realized that all heritage should be kept and preserved from generation to generation. During you way from Bukhara to Khiva, you will see endless Kizil Kum desert and Amu Darya. Amu Darya is the deepest river of Central Asia, which consist of Panj and Vakhsh from Tajikistan. It flows its water into the famous Aral Sea. Night will at the hotel.

Day 6: Khiva
Today you journey will continue in the oldest city Khiva. During the city sightseeing, you will find yourself in a fairytale town. The most incredible part of the city is Ichan-Qala, inner center of the city divided and surrounded by walls. There are more than 400 houses of traditional style and over 60 monuments of architecture in Ichan-Qala. They are Madrasahs, Mausoleums, Minarets, Caravan-Sarais, sound buildings, palaces, mosques and Bathhouses dating back to medieval ages. In 1969 city was renovated historical and architectural conservation territory. The most valuable site is Kunya-Ark fortress, built during 17th century by Muhammad Arang Khan. Minaret of Kalta Minor and Palace of Tash Khouvli are amazing forms of architectural mastership constructed in 1830s. Overnight in a hotel.

Day 7: Khiva - Tashkent
After breakfast, you will fly to Tashkent. Today you will continue city tour in capital of Uzbekistan. Courage Monument will be the first site to visit. It is a memorial complex, constructed as a symbol of the elimination of the consequences of the Tashkent earthquake. Later Zangi Ota memorial complex will follow the tour, in accordance to the local legend, Zangi-Oota was a herder and was outstanding by his wisdom and good deeds. Further you will enjoy the excusion in the State Museum of Timurid's history. It is rich in archealogical findings like jewelry, musical instruments, weapons, various coins, paintings, documents, historical manuscripts and clothing of Timurid's period. There more than 3000 artefacts kept in this museum. Today's tour will be concluded by the State Museum of Applied Arts of Uzbekistan. This museum is a huge storehouse of the cultural wealth of Uzbek people. You can see old national clothing, hand and machine embroidery, skullcaps and national fabrics, carpets, woodcarving and many other cultural items. Night will be at a hotel.

Day 8: Flight
After breakfast, your guide will accompany you to the airport.